“What about the ‘alt-left’ that came charging at the, as you say, the ‘alt-right’? Do they have any semblance of guilt?” – Donald Trump, President of the United States, August 15, 2017

Fighting nazis is now just as bad as being a nazi. Some nazis are fine people. Just ask 45.

“You also had some very fine people on both sides.” – Donald Trump, President of the United States, August 15, 2017

Fighting nazis is hard work, just ask Indiana Jones. Is it okay to punch nazis in the face? Drunk Publius prefers drinking to violence, but if you just have to punch someone, a nazi is a good place to start.

If you’re tired from a big day of clubbing skinheads like they were baby seals, kick back with this drink while you reminisce about a time when a president would actually condemn neo-nazis. 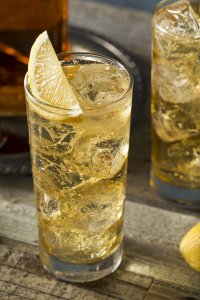 Directions: Pour two ounces of whiskey into highball glass, then pour in the ginger beer. Garnish with lemon slices, wedges, or spirals. (Although spirals are more fitting if you’re an elitist.) Enjoy while polishing your nazi-beating clubs.