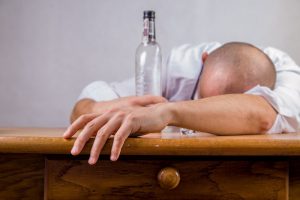 Not learning from history

If you drink to the point of memory loss, more things will be unprecedented to you. “I was dancing with a lampshade on my head last night? That’s unprecedented!”  “What do you mean that I did the same thing on New Year’s Eve? No way!” (While a Trump Presidency may drive Democrats and Republicans alike to drink, we do not recommend drinking until you are black-out drunk.)

In Trump’s case, it was “unpresidented” that the Chinese should capture an unmanned submarine drone. (Or, as The Guardian explained: “President-elect makes spelling error in belligerent early morning tweet”) It’s unlikely that Mr. Trump was suffering from alcohol-induced memory loss during the George W. Bush administration when a United States aircraft was captured by the Chinese after colliding with a jet over disputed Chinese airspace.  Twenty-four American crew members were held by China for ten days, and the U.S. aircraft was shipped back in boxes.  His historical ignorance is self-inflicted and likely a point of pride among his followers who regard book-knowledge with suspicion. They do not care that Mr. Trump is frequently wrong so long as he is never in doubt.

The unpresidented breadth of Mr. Trump’s historical ignorance is likely to be the source of repeated international incidents. When one of these crops up, we suggest mixing yourself a Twitter Beef to take the edge off. Of course, too many of these and you’ll be needing a big batch of Societal Collapse.